I once took classes as an 8-year old. I remember playing a decent amount on Yahoo! Games as a teenager. But mainly, it was the in-person, banter-filled games with my best friends in high school that I loved most.

One thing that I’ve always liked about Chess is how universal it is. This is a picture of me in Uzbekistan in July 2013, encountering a few local kids at a sidewalk café, and stopping to enjoy a cup of juice and a quick match. 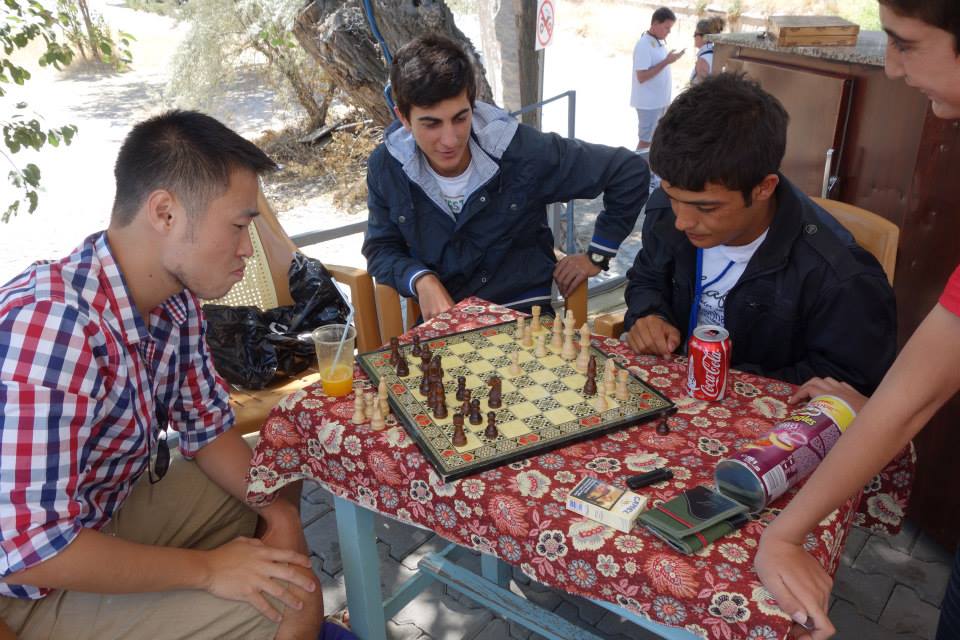 We didn’t speak one another’s language, but Chess created a mutual connection and a lasting memory =)

Nowadays, I play Chess on an app.

I prefer the untimed variety. I like having plenty of time to think without stress. I like that I can play asynchronously on my own schedule. And I love the strategic element of the game.

And of course, my mind can’t help but wander to the business side of Chess. First, let’s analyze the core product, which I think benefits from a few unique advantages.

Chess as a Product – durable appeal and accessibility

Chess dates from the 1st millennium and is the most popular board game in history. Some sources estimate that there are 600 million Chess players globally.

Unique amongst games, Chess is seen as less of a frivolous pastime and more of an intellectual sport. (Anecdotally, my parents limited how much StarCraft I was allowed to play as a kid – but there were never any restrictions on Chess!)

That may also be because Chess is easy to understand. After all, the rules are easy to learn, but the game is hard to master. This makes the game very accessible to beginners, and further enhances its popularity.

Furthermore in Chess, it is extremely easy to handicap the better player to balance the playing field and provide a learning opportunity. You could remove a piece, give one side more time, or provide takebacks. Easy handicaps help make the game more fun & accessible for all.

Lastly, Chess is very spectator friendly. As an observer, you can think through moves alongside the players. And given the turn-based, mental nature of the game, it’s almost as if you are playing the game yourself. No other competitive event can come close – except perhaps televised Poker – another of my favorite games.

A very interesting thing I noticed is that the Chess app I use has Twitch built-in. They regularly advertise on the home page, and with the click of a button –I seamlessly navigate to a livestream of Alexandra Botez – a popular Chess influencer. 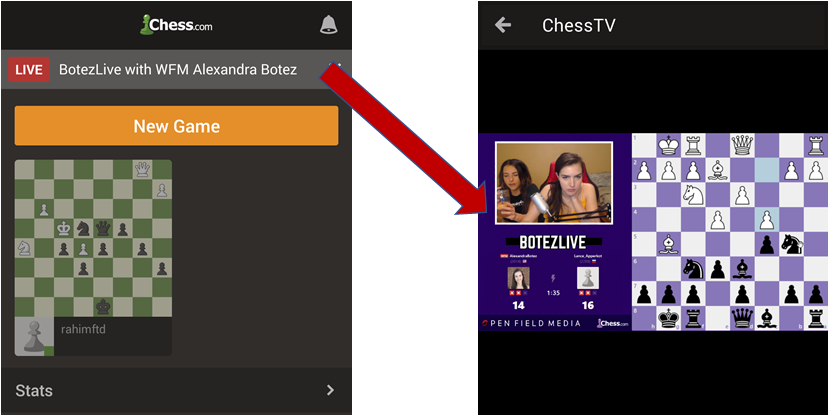 Technologies such as Twitch make it easier for Chess influencers to earn money via advertising and sponsorships. And there are others ways to make money too. For example, a Grandmaster with the pseudonym Chessbrah sells branded clothes.

While I can’t speak to the quality of Simon’s paid material, I did watch a free YouTube recording of one of his Chess streams. I would recommend as it is not only highly instructional, but also a great look at the modern Chess economy in action. 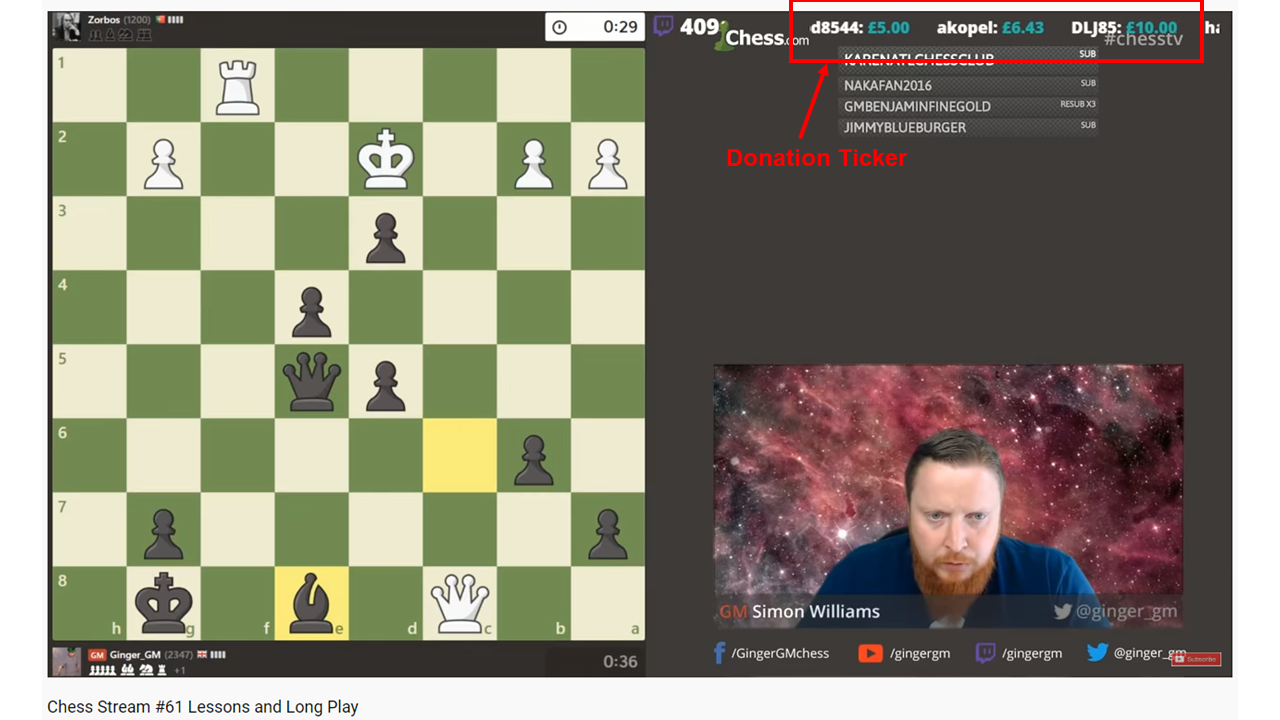 In the video, Simon mentions that the bulk of his income comes from sales of instructional materials. And notably, several people tipped Simon during the livestream. Most tips were about ~£5-10 , but there was one £50 donation!

Just like other professional sports, Chess seems to follow a power law. It’s very difficult for players outside the top 20 to earn significant money from tournaments and endorsements. And there are only so many Alexandra Botezs, Chessbrahs, and Simon Williams’ that the industry can sustain.

But I think that there is another economic model for Chess that is being neglected.

If you’ve ever walked around Union Square in Manhattan – you’ve seen the Chess Hustlers sitting around. You can walk up and pay ~$5 / game to play them. Demand is brisk, and some of these hustlers make $400+ / day.

I think that there is an opportunity to take that pay-to-play model and apply it to digital Chess. And I see no reason why micropayments can’t be integrated into a Chess app directly.

Another key feature that would enhance this economic model is asymmetrical time limits. For example, an expert could be allotted 15 seconds per move, but an amateur could have 15 minutes per move, or even unlimited time.

Under these time constraints, if an expert can complete games in an average of 40 moves and charges $20 / game, she would make $120 / hour – whether she wins or loses.

I used $20 / game as the benchmark because I would personally pay at least that amount once a month to play with an expert who can help me improve. The expert limits her precious time, and I as the paying customer have all the time in the world to work on my game. Plus – it would be an interesting social interaction, something that I would tell my friends about.

You can do other creative things too. For example: the challenger pays $100, but if he beats the expert, then the challenger gets $50 back. Want to takeback a move? That will be $10!

How to capitalize on this?

There are 3 major chess platforms in the world. Any one of them could build this. Chess.com, the platform that I use, seems to be relatively tech-forward. They have that neat integration with Twitch shown earlier.

I’m not sure why Chess.com hasn’t gone down the micropayment route. This article is a great overview of their history + vision. They are a distributed company, have bootstrapped for years, and raised a very modest amount of capital in 2015. My hunch is that they looked at their own resources, made a strategic calculation to partner with Twitch in 2017 rather than build in-house.

As an outsider, I have no idea what the partnership agreement between Twitch and Chess.com looks like. Theoretically, if Chess.com started building micropayments as outlined above, it could eventually bring them into competition with their partner. So that potential conflict of interest may be all the opportunity that another entrepreneur needs.

As we saw with Simon Williams, Twitch’s platform does enable donations. But that model is clearly a blunt instrument and you can’t unleash Simon’s full potential with it.

There is an opportunity for a micropayment-focused chess app to revolutionize the industry. Building the product wouldn’t be cheap, and gaining an audience won’t be easy. But in this modern influencer era, success is very possible.

How big could this be?

To estimate the market for this let’s start by focusing on Chess.com. It alone has over 20 million members, and over 1 million are active daily. (Apparently, Coronavirus has accelerated the popularity of the game. Chess.com expects to see a decade’s worth of growth in the next few months!) 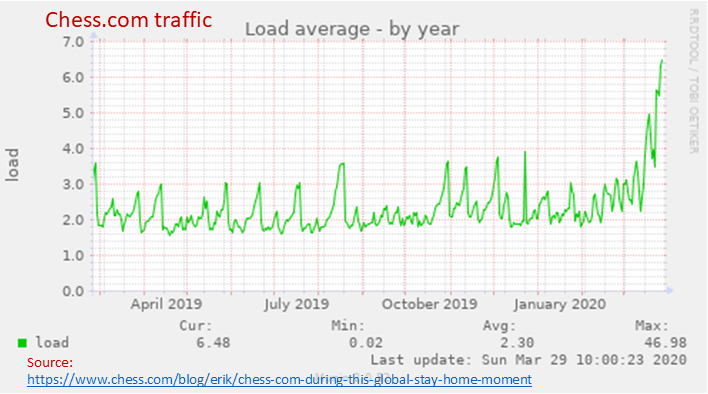 This doesn’t include advertising or any type of add-ons—i.e. subscriptions, 1-on-1 coaching, group lessons, etc.

But let’s not stop there. Let’s look beyond Chess.

The real long-term opportunity is to take on Twitch, acquired by Amazon in 2014 for ~$1 billion and estimated to be worth ~$4 billion today

After all, if micropayments work in Chess, there is no reason why the same model couldn’t be applied to other games. For ANY player who wishes to monetize her talent, you could provide a credible, more flexible alternative to Twitch.

It would be very cool to see an entrepreneur give this a shot, and I’d love to help in some way.

Lastly, apart from the business idea – my handle on Chess.com is @yishizuo. Feel free to shoot me an invite =) I’m always down to meet new friends via a casual game!

About the author: Yishi is a former hedge fund investor and current entrepreneur who enjoys thinking about businesses in his free time. http://www.yishizuo.com/about/

He is the CEO of DeepBench. We connect users with experts on any topic in any industry, and we also license our software to enterprises to help them build their own knowledge networks. (Check us out if you are interested in joining our network or using our product!)